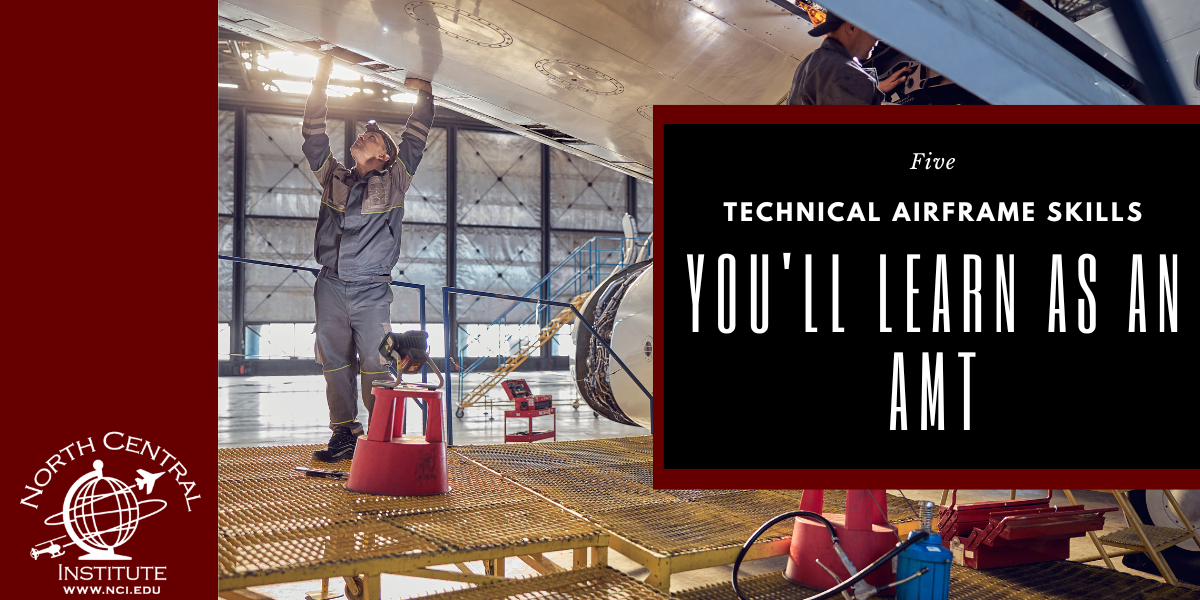 When you start your journey to become an aviation maintenance technician (AMT), there is a lot of new terminology you’ll need to learn. One of the most prevalent terms you’ll hear is ‘airframe’. It is the ‘A’ in ‘A&P Certification’. But what is airframe?

Airframe refers to the body and structure of an aircraft. Just like the human body, there are more specific terms you can use when talking about the different areas of the body of the aircraft. These include:

These different parts of the aircraft require constant maintenance to ensure the safety of both the aircraft and those travelling in and around it. Because of this, AMTs need to know how to work with a variety of different materials so that they are prepared to repair any damage that occurs.

When you go to school to become an AMT, you’ll learn important social skills like communication and teamwork, but there is also myriad of technical skills you will learn as well.

This is the process of shaping metal into a desired form. The process includes cutting and bending as well as applying surface treatments and also assembling the piece you just created. Just like with any other construction project, measuring is one of the most important aspects of metal fabrication. Along with measuring, other skills being used for this include but are not limited to: being able to read blueprints, how to fasten sheet metal, forming & casting, and assembly methods.

However, replacing and refinishing the outer structural components, internal components, and being able to perform standard body repairs to the aircraft may be required. This can include manufacturing and metal fabrication along with sanding, masking, priming, spray painting, and repairing minor damage.

Although most often needed in the manufacturing and overhaul sectors, welding is an important skill for an AMT to have. Not only will they learn how to weld but also how to inspect welds and determine their quality for the continued airworthiness of the aircraft.

The most common types of welding in aviation are:

Just like your car, electrical systems run through the structures and engines of an aircraft. Not only is it important to know such skills as wiring methods and AC & DC electrical theory, you’ll also need to know how to read schematic diagrams and blueprints as an AMT. Because a lot of an AMT’s job is inspecting the aircraft, it is also important to know where protective safety devices such as circuit breakers and fuses are. These will be on the blueprint of the aircraft.

Depending on the age of the aircraft, the heating, ventilation, air conditioning, and refrigeration (HVAC/R) systems will look different. However, no matter what they look like, their maintenance will require all the same skills you’ve been accumulating as you become an AMT. You’ll need to know things such as welding and blueprint reading, but you’ll also learn new skills specific to the system. Although older systems cooled the hot air that was passing through the engine’s low pressure compressor to create breathable air inside the aircraft, new systems work more like your car. They use fresh air that is scooped in by the exterior pockets to provide fresh air for passengers and crew.

If you’re interested in becoming an aircraft maintenance technician and want to get your career off the ground as soon as possible, contact NCI today!