The History of the Spruce Goose 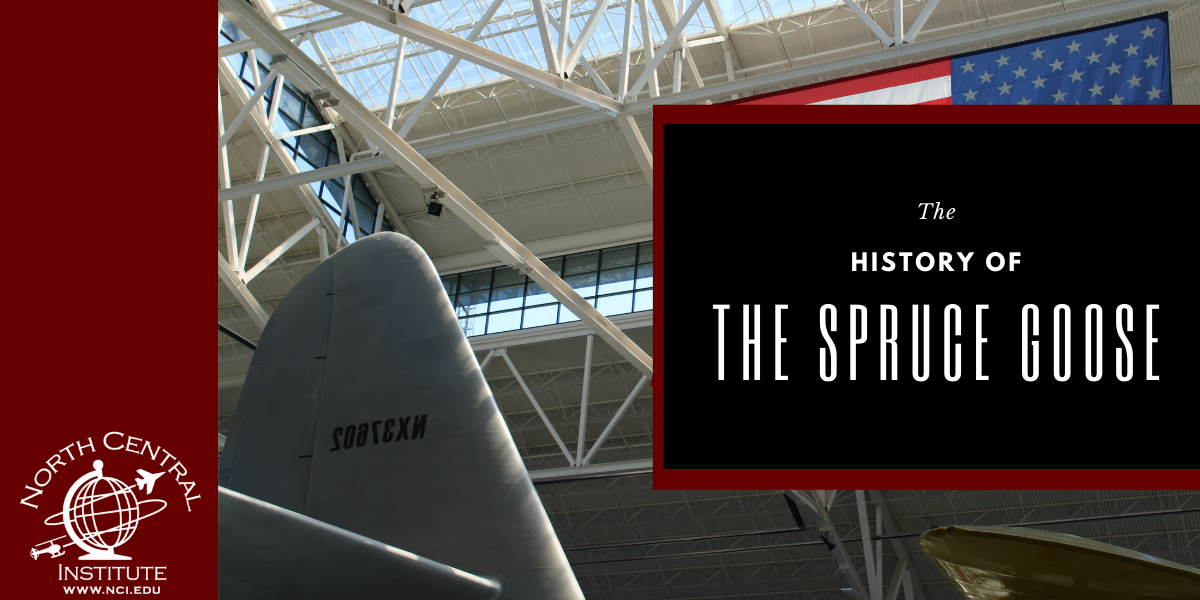 Although Howard Hughes is now most remembered for his eccentric behavior and reclusive lifestyle, he first gained notoriety as a Hollywood producer and director in the 1920s. His films often ran over budget and were delayed by censors for sequences of violence. He was also known as a business magnate, investor, skilled engineer, philanthropist, and even a record-setting pilot.

While Hughes was working in the film industry, he also became involved in aviation. In 1932, he founded the Hughes Aircraft Company. Just three years later, Hughes broke the world’s landplane speed record in a plane he designed himself, the Hughes H-1 Racer. Of course, in the world of aviation, it is not the H-1 we still remember, but the H-4. Better known as the Spruce Goose. However, this fete of aviation only flew once. To better understand why, there are a few other questions that need answering first.

Why Did Hughes Build the H-4?

Also known as the Hercules, the H-4 was originally commissioned by the U.S. government. Henry J. Kaiser, a ship builder, was the mastermind behind the original idea in 1942. During World War II supply ships being sent from America to Europe were being bombed by enemy torpedoes. Kaiser wanted a way to transport troops and supplies overseas by air. However, because he was a ship builder, Kaiser didn’t know anything about building a plane.

This is where Howard Hughes comes in.

Because of the sheer size alone, the military and aircraft industry were wary of the design. The H-4 was meant to be 6 times larger than any other aircraft at the time. The team was able to land a government contract, receiving $18 million to build 3 prototypes.

However, there was a catch.

There were restrictions on metal due to the war. This meant the men would have to use wood to construct their aircraft. Although it was not uncommon to find smaller aircraft made of wood, the material was untested in an aircraft so large. With a wingspan of 320 feet and 8 propeller engines, the H-4 was designed to carry 750 troops or 2 Sherman tanks.

Why Was It Called the Spruce Goose?

Not only did people think the aircraft wouldn’t fly solely because of its size, but because they were expecting the entire aircraft to fall apart. At this point in time, no aircraft of its size existed, let alone one made out of wood. However, the H-4 was not actually made out of spruce. It was built using a special composite that was primarily birch.

The aircraft was also made of canvas, which gave it was white color. The wooden construction along with the color are what caused critics to nickname the aircraft the “Spruce Goose”. Hughes felt that this name belittled his team that was building it and the revolutionary use of this new birch composite. However, this name above all others is what has lasted throughout history.

As World War II waged on, the metal restrictions were lifted. However, enamored with the use of birch, Howard Hughes continued to use it instead of the aluminum his team wanted him to. In 1944, Henry J. Kaiser withdrew from the project. But Hughes continued on.

Even after the government cut off funding and Hughes was investigated for misappropriation of funds, he sank $7 million into the project himself. Hughes was determined to see it fly. Even after WWII ended, and the plane was no longer needed, Hughes kept on working.

Why Did It Only Fly Once?

Construction of the Spruce Goose was finally completed in 1947, two years after the end of World War II. Initially, the plane was only supposed to be conducting water taxi tests on November 2, 1947. With Hughes at the controls, during the final test, the behemoth took off and was airborne for the 26 seconds it took to fly one mile. It only flew at an altitude of 70 feet over the ocean. Some claim that Hughes made this flight to prove that the project was a success and that he not in fact appropriated government funds.

Unfortunately, this is the only flight the Spruce Goose ever had. Some claim that Hughes was too afraid to fly the plane again. The more likely reason is that the need for the craft was gone. With World War II over, there was no more need for large seaplanes, especially one that was made out of wood.

Become a Part of History

Even though Howard Hughes’s first career was not in aviation, he went on to become one of the most well-known names in the industry. Whether you’re just starting out, or looking for a career change, aviation maintenance might be the right fit for you. At NCI we have programs for people with no experience and those who want to add to their toolbelt. Want to learn more? Contact us today!