3 Plane Crashes That Could Have Been Prevented with Proper Maintenance 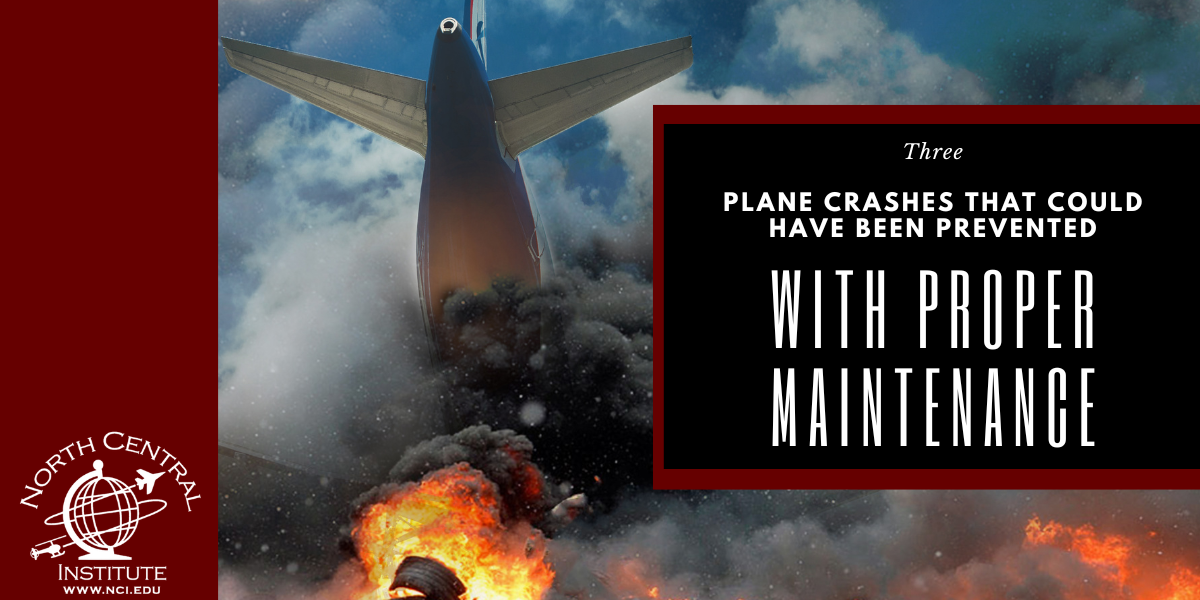 Just like with any sort of transportation, aviation accidents happen. Whether it is a fatal crash or not, these can be extremely scary occurrences. In some cases, there is no way that these crashes could have been avoided. However, there are often times when they could have been avoided with the proper maintenance.

How It Happened: On August 12, 1985, Japan Air Lines (JAL) Flight 123 took off out of Tokyo’s Haneda Airport headed towards Osaka’s Itami International Airport. This domestic passenger flight should only have been a little over an hour. However, 12 minutes into the flight, the Boeing 747SR suffered a sudden decompression and crashed into the Osutaka Ridge about 62 miles outside of Tokyo. There were 524 people on board the aircraft at the time including 15 crew members and 509 passengers. Only 4 passengers survived the initial crash but then died of their injuries as they waited to the rescued.

How It Could Have Been Avoided: Investigations found that the sudden decompression of the aircraft was due to a faulty repair by Boeing technicians after an incident 7 years prior. In 1978, the aircraft had suffered from a tailstrike during landing at the Osaka Airport. The rear bulkhead had had to be repaired but was installed improperly. Over the next seven years leading to the crash of JAL Flight 123 the constant cabin pressurization and depressurization weakened the improperly repaired bulkhead until a large portion of the tail was ripped off mid flight on August 12, 1985.

How It Happened: Aloha Airlines Flight 243 was a scheduled domestic flight between Hilo and Honolulu, Hawaii on April 28, 1988. Just like in Japan a few years prior, the Boeing 737-297 suffered from a rapid recompression mid-flight. Luckily, the aircraft was able to safely land at Kahului Airport on Maui. There was only one fatality: a flight attendant was ejected from the plane when the decompression occurred. Of the 89 passengers, only 65 were injured during the accident. The aircraft had already flown three round-trips earlier that day without any incident. Shortly after Flight 243 reached cruising altitude and speed, the left side of the roof ruptured, tearing away the entire top half of the fuselage.

How It Could Have Been Avoided: Investigations found that the accident was caused by metal fatigue and crevice corrosion. Because inspection and maintenance on the aircraft were conducted at night without proper lighting, maintenance crews were not able to adequately inspect the aircraft’s exterior. The aircraft was also about 19 years old when the accident occurred and operated in a coastal environment which would have accelerated any corrosion. After this accident, the FAA, Boeing, and Aloha Airlines improved their maintenance programs.

How It Happened: On January 31, 2000, Alaska Airlines Flight 261 crashed into the Pacific Ocean about 2.5 miles north of Anacapa Island, California. The international flight from Licenciado Gustavo Díaz Ordaz International Airport in Mexico to Seattle, Washington with a stop in San Francisco, CA suffered a catastrophic loss of pitch control. All 83 passengers and 5 crew members were killed in the accident. For the pilots’ heroic efforts to save the plane, they were posthumously awarded and commemorated.

How It Could Have Been Avoided: Investigations for that inadequate maintenance was the cause of the accident. Excessive wear and the eventual failure of critical flight control systems was caused by Alaska Airlines’ insufficient lubrication of the jackscrew assembly in the aircraft stabilizer system. The threads of the screw had worn away faster than had been expected, causing the complete failure of the stabilizer assembly. Sufficient lubrication of the jackscrew and stabilizer assembly could have lessened the deterioration of these critical parts. Unfortunately, the lack of proper lubrication resulted from Alaska Airlines’ attempts to cut costs.