The Road to Powered Flight 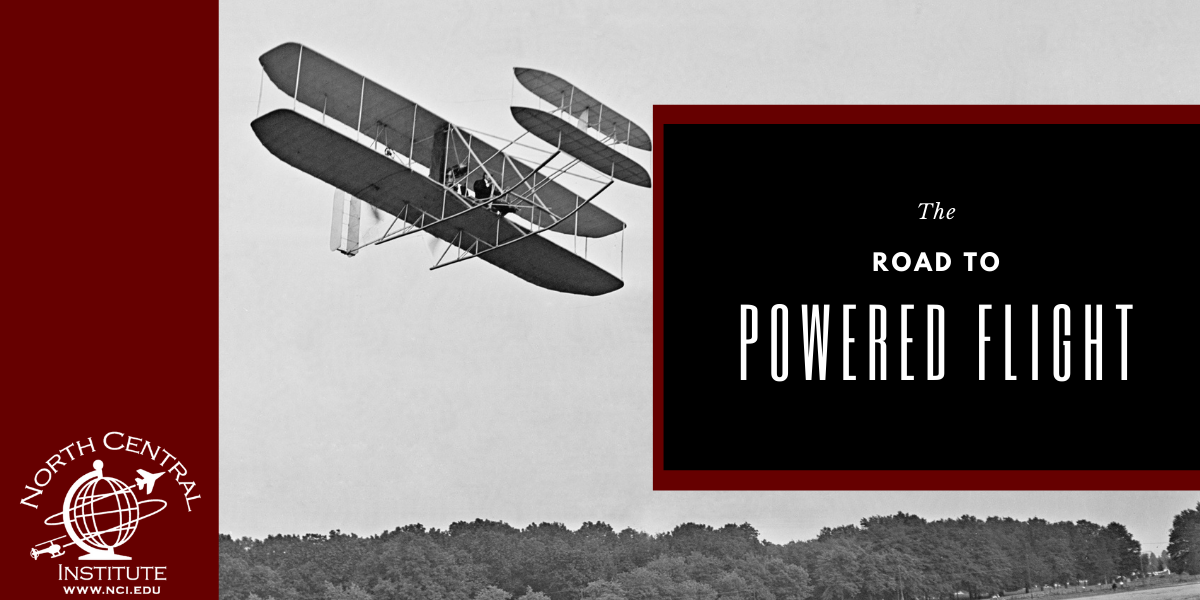 When you look back through history, even all the way back to the ancient Greek, you will find instances of humans trying to achieve flight. From the story of Icarus flying too close to the sun, to Leonardo Da Vinci’s notebooks full of sketches of flying machines, flight has always been a human fascination.

First, they looked to birds. They tried to build wings, strap them to their arms, and flap them. Others made machines that would flap. Unfortunately, they quickly discovered that this method of flight was better left to the birds. Next, they turned to balloons. They were held aloft with either hot air or hydrogen gas. However, they were hard to control and at the mercy of the wind.

Lift needs to balance weight and thrust must overcome drag. Because of this, he realized that to attain flight, an airplane would need to be a fixed-wing machine with the ability to control lift and propulsion.

In 1853, Cayley sent his coachman, John Appleby, aloft in a glider. The glider had a small, boat-light carriage that hung below wings. The glider was launched by being drawn by galloping horses, and likely only flew for a few seconds. However, this is the first recorded flight of a fixed-wing aircraft carrying an adult. Cayley himself was 80 years old when this flight occurred. It was the culmination of a lifetime of work, and if he hadn’t been so old, he probably would have made the flight himself.

Cayley made many successful gliders, but realized that in order to have truly successful flight, he would need some sort of power. Unfortunately, the only power available at the time was human power, with steam power emerging on the horizon. It is argued that if Cayley had had access to a lightweight engine, he would have been the first to achieve a successful powered flight.

Because of George Cayley’s many contributions to manned flight, he is recognized by many as “The Father of Aeronautics”.

Around the same time as Maxim, a German inventor named Otto Lilienthal was also designing and building gliders. Considered the first successful aviator, Lilienthal’s research into wing aerodynamics laid down the foundation of concepts that are still employed today. He wrote about his findings in his book Der Vogelflug als Grundlage der Fliegekunst (“Bird Flight as the Basis of Aviation”).

Between 1891 and 1896 Lilienthal completed approximately 2,000 flights in as many as 16 different types of gliders. At around this same point in history, high-speed and stroboscopic photography were in development. This meant that photos of Lilienthal flying through the air aboard his gliders were published in newspapers and magazines around the world. The age of flight was at hand.

Inspired by Lilienthal’s successful flights, the Wright Brothers started to experiment with the aerodynamics required for powered flight.

Although their first successful, powered flight didn’t occur until 1903, the Wright Brothers’ journey began in earnest in 1899. While coming up with the first designs for their aircraft, they used data tables originally written by Otto Lilienthal and other published material on aeronautics sent to them by the Smithsonian.

The following year, the brothers start to plan and build their first glider. While this is occurring, they are also trying to figure out the best place to test their glider. They even write the United States Weather Bureau inquiring about locations with high winds. They find Kitty Hawk, North Carolina in May of 1900.

Later in 1900 they travel to Kitty Hawk and begin the first test flights of their glider. Unfortunately, they experience setbacks when the wind picks up their glider and smashes it. After rebuilding, they are able to continue their tests. The glider doesn’t produce the amount of lift that they calculated, so they pack up and go back to Dayton, OH to continue tweaking their designs.

In 1901, they return to Kitty Hawk with their second glider. This is also the year that they hire Charles Taylor to run their bicycle shop while they are away testing their glider. Still, the glider is not producing the lift that it should. Their test flights do not go as well as they hoped, and they return to the drawing board.

Their return to Kitty Hawk in 1902 sees the Wright Brother’s successfully fly their glider. They have overcome the issues of the previous attempts, but there is still something missing for powered flight. An engine.

With the help of Charles Taylor, the man who built the engine for them, the Wright Brothers make the first powered flight in a fully controllable aircraft in 1903. Although this first flight only lasts 12 seconds, they continue to test their aircraft with their longest flight being 59 seconds.

After these first successful flights, the Wright Brothers and others would continue to design and build more aircraft. From the first wooden structures to aluminum and composite materials: airplane designs are always changing.

Although it was a long road to powered flight, it would not have been possible without the man who built the engine: Charles Taylor. As long as there has been powered flight, there have been people needed to build and maintain the aircraft. Although the first was just a man hired to work in the Wright Brothers’ bike shop, aircraft maintenance is legitimate field, and one that needs you. Want to learn more about what it takes to build and maintain aircraft? Contact NCI today!