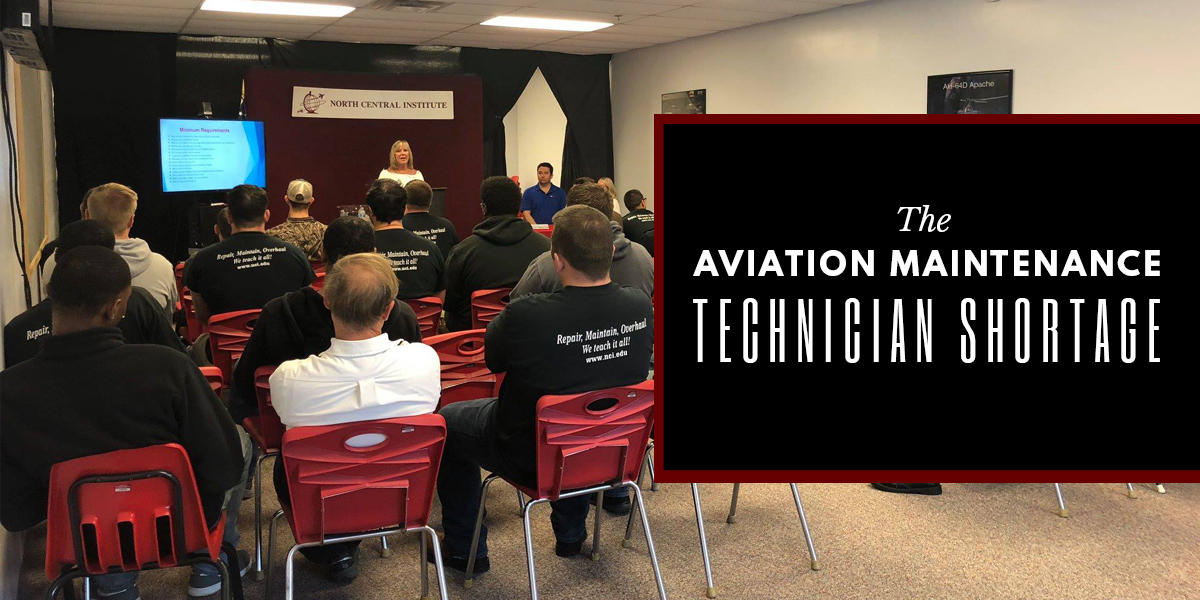 There’s a worldwide shortage of aviation maintenance technicians, and it’s nothing new. For years, the aviation industry has been aware of the growing problem. According to a 2017 report by the Aeronautical Repair Station Association (ARSA), this shortage could be costing the aircraft repair industry as much as 2 billion dollars per year. Although many organizations have been working on a solution to the problem, the supply of qualified aircraft technicians is not improving fast enough to meet demand. While this is a headache for major airlines, shipping companies and service and repair companies around the world, it creates a remarkable opportunity for people interested in entering this exciting and rewarding field.

Although retirement and attrition are partly responsible for the shortfall of qualified aviation maintenance technicians, the key reasons are economic and technological in nature. According to another report by the ASRA, global demand for air travel is increasing every year. The report states that this is due in large part to economic factors, such as increasing GDP and personal incomes, as well as an expanding middle class. Additionally, as people are living longer and experiencing better health in their senior years, more retirees are likely to travel by air. The report also credits advances in technology with making air travel easier and more accessible to everyone, citing the use of digital boarding passes and on-board wifi.

Whether it’s a fast-expanding market like China, with an annual increase in air travel of nearly 10%, or a more stabilized economy like the United States at 4%, the fact is that the demand for pilots, cabin crew, ground crew, and qualified aviation maintenance technicians is on the rise. A forecast published by Boeing reports that 769,000 new technicians will be needed around the world by 2038. The anticipated regional breakdown for these positions is noted in the report:

In addition to the economic causes, the increase in demand for qualified technicians can also be traced to technological changes in aircraft manufacturing. Newer aircraft require different skills to maintain compared to older ones, but both are still in widespread use. More than 50% of Boeing’s current deliveries are to accommodate growth, rather than fleet upgrades and aircraft replacements. However, the remaining orders are only replacing about three-fourths of existing machines. This means tomorrow’s fleets are going to be composed of a mixture of cutting-edge aircraft and much older machines. Therefore, there is a need for aviation maintenance technicians who can repair older aircraft but who are also familiar with things like composite materials, digital systems, and additive manufacturing (3D printing). The industry needs new technicians with the latest training, and it needs them now.

The Impact of COVID-19

Although the shortage of aviation maintenance technicians has been a growing problem for years, the emergence of COVID-19 has made matters worse. According to an article by Aviation International News, a quarter of all FAA-certified aviation maintenance technician schools in the US have suspended operations entirely. Of the remaining schools, half are expecting graduations to decrease by 25% and new enrollment to decline by 28% for the year. While many schools have added online learning options, the fact is that hands-on time is essential when you’re learning how to repair and maintain an aircraft. Therefore, many schools have had no choice but to delay graduation until their students are able to complete lab assignments.

On top of these challenges, there is a general lack of awareness which contributes to the shortage of new aviation maintenance technicians. This is reflected in the fact that 2 out of 5 slots are still available in maintenance schools worldwide. Most of these schools are small, and they can’t aggressively market their programs. In a sense, aviation maintenance is a hidden gem among aviation careers. It’s simply not on people’s radar.

It’s easy to picture the glamorous life of a pilot, and almost everyone has looked through an airliner’s window and watched ground crews at work. Technicians, however, operate where the public can’t see. As a result, many people don’t realize that this rewarding career even exists. It’s also likely that most people don’t realize how accessible an aviation maintenance career can be. According to the Director of Marketing and IT for the Pittsburgh Institute of Aeronautics (quoted in this article from Pittsburgh International Airport), one of the problems is that many people assume a four-year education is required. While that’s certainly an option, the majority of aviation maintenance technicians received their training at schools like North Central Institute.

Not only is training easier to get than people imagine, so are jobs. The aviation maintenance industry is much more focused on small- and medium-sized businesses than people think. Large corporations, such as major commercial airlines, account for only 20% of the worldwide demand for technicians. The remaining 80% of jobs are all in smaller facilities and in far more localities and communities than people imagine. You don’t have to relocate to a large city or work in an enormous aircraft plant to have a rewarding career in aviation maintenance.

Are You Part of the Answer?

As you can see, the shortage of aviation maintenance technicians around the world means that there is a place for you. Not only is it a rewarding and satisfying career, it’s a growing job market with no signs of future instability. This is the best possible time to enter this field. Not only will you be in demand the minute you walk out the door with your certificate, you’ll most likely have job security for life. Compared to other technical careers, a future in aviation maintenance has one of the best long-term outlooks.

If you’re ready to spread your wings in an exciting and rewarding new career, contact North Central Institute today. The future needs you!