The Evolution of Aviation Maintenance 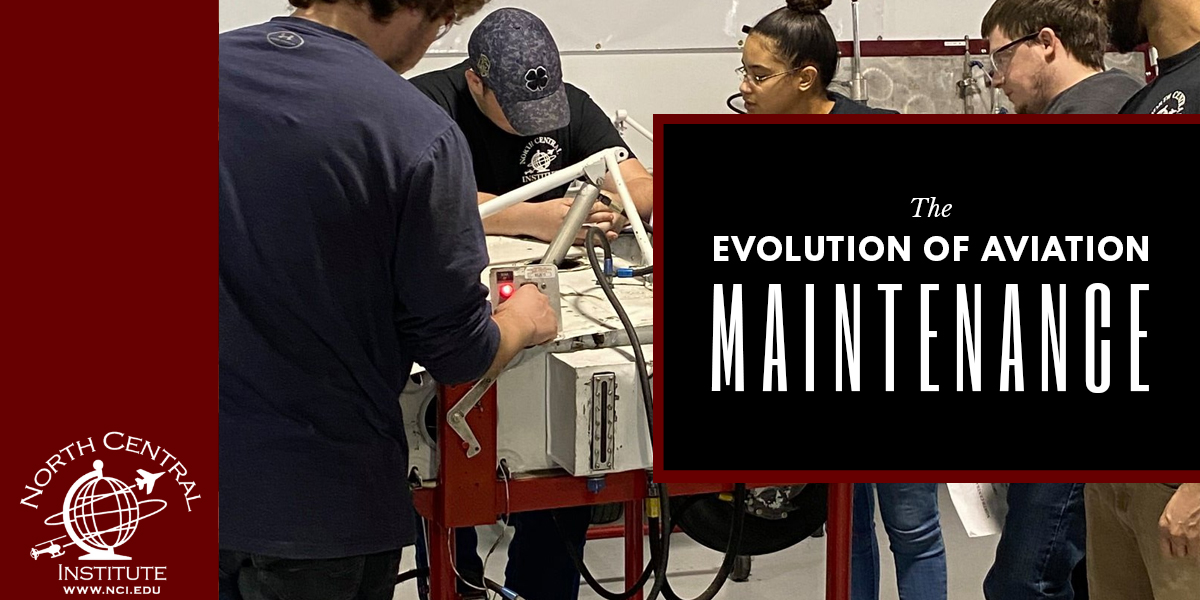 From the Wright Brothers’ first airplane to today’s Boeing 737, aviation has come a long way in the past 100 years. Where once there was wood and fabric to keep them aloft, aluminum and fiberglass are now the predominant materials, and the only fabric you’ll find is your seat. However, the building materials aren’t the only thing that has changed in aircraft design over the years. With the days of propeller driven flight fading into the distance as major airlines abandon turboprop airplanes, we have to ask ourselves why. Airplanes have had propellers since the beginning, but why give them up now? The answer: maintenance. Just like the parts of planes we do see, the parts we don’t have been changing too. Engines are always evolving, and turboprop airplanes are becoming increasingly difficult to maintain. With all this new technology as the driving force, we need people who can keep up with these new systems. Before we get into that, what did aviation maintenance look like 100 years ago, and how did we get to where we are now?

When the Wright Brothers made their first flight in 1903 there was no such thing as an Aviation Maintenance Technician. Charles Taylor, a man who worked in their bicycle shop, was the closest thing they had. When he built the first aircraft engine, he had no instructions or manual to follow. If anything went wrong, it was his job to figure out the problem and try to fix it to the best of his abilities. He was completely self-taught, the first of his kind, but definitely not the last. He helped create an entirely new field of work: aviation maintenance technicians. At first there were no requirements or regulations, but by 1909, technicians began to be licensed. The first standards were implemented later, in 1919.

What did the field look like as planes started to “take off”?

As Boeing launched the first 747 aircraft in 1969, they were also innovating new ways to troubleshoot. Instead of trial and error, they started using the “bottom up” process. This gave technicians a pragmatic way to evaluate their systems and determine which components were malfunctioning. However, prior to the 1980s, technicians dealt with mechanical and analog systems, unlike the complex digital systems we see today.

Started in the 1960s and reinstated in the 1980s, Power-by-the-Hour allowed for more cost predictability with scheduled maintenance over an extended period of time. Planes were starting to have built-in test equipment (BITE) starting in the 1960s. Unfortunately, BITE were limited to indicators that were provided by the system, which did not take into account everything that could possibly malfunction. Because of this, there was still the possibility of technicians replacing the wrong equipment while the faulty parts remained. With the implementation of Power-by-the-Hour and scheduled maintenance, airlines were able to save money: only replacing necessary parts while leaving operational components alone. Scheduled maintenance also helped to increase safety standards.

With all the advances in technology there has also been an advancement in safety: not only for passengers and crew but also those on the ground. Everything in the aviation industry is highly regulated, with standards and policies set by the government. The biggest change however, is now technicians are taking preventative measures. They are no longer trying to fix problems as they arise, they are trying to prevent them from happening in the first place. Although this scheduled maintenance began almost 60 years ago, it has been fine tuned since with government regulations leading the way.

After these maintenance checks are carried out, a licensed technician must record and sign off on all repairs made.

What Does the Future of Aviation Maintenance Look Like?

Technology has always been the driving factor in the aviation business. With advances in technology we also have advancements in safety and efficiency. In the future we may see:

Wherever the future of aviation maintenance is going, we can only go up from where we are.

How to Get Your Career Off the Ground

No experience? That’s okay! Charles Taylor didn’t have experience either. North Central Institute has a program just for you. Unlike Chalres Taylor you’ll have decades of knowledge behind you to propel your career forward. You are no longer required to teach yourself what you need to know. Instead, at NCI you will be enrolled in a 17 month program that offers both theoretical and hands-on experience. You will take courses in both Airframe and Powerplant mechanics; learning the ins and outs of engines, landing gear, brakes, and air conditioning systems. Maybe you’re looking to expand the knowledge you already have. NCI has a program for you too that can be completed in as little as 4 weeks.  Now that you know how far the industry has come in the past 100 years, don’t you want to see where it will go in the next 100?