The FAA and the Launch of 5G 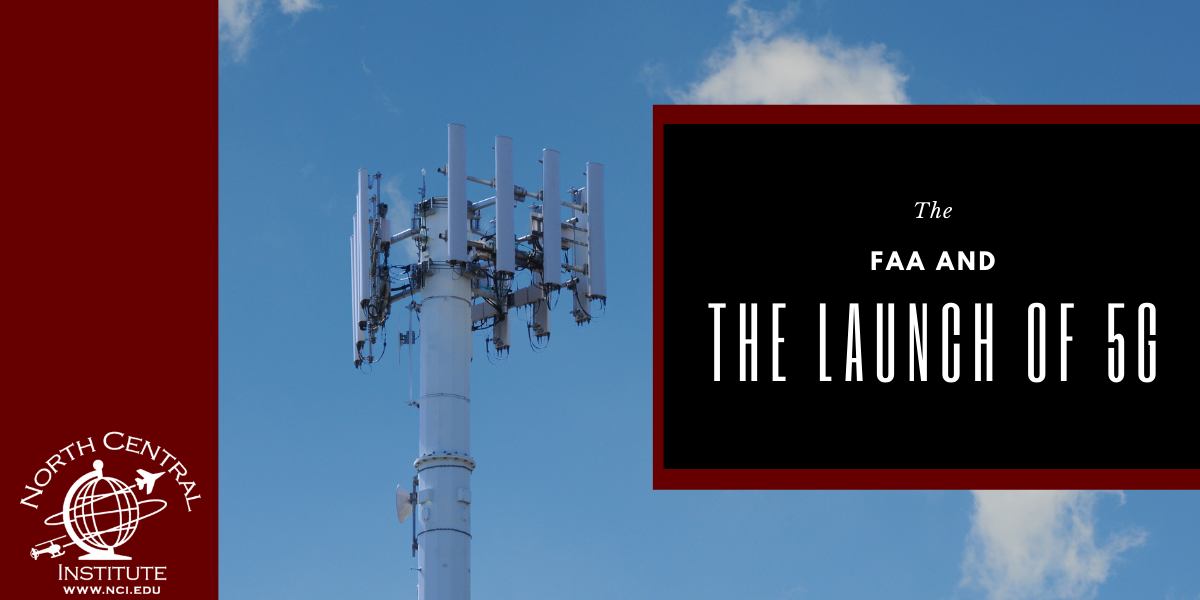 Chances are, if you’ve bought a new cell phone in the past few years, it is equipped with 5G. Even if you don’t know what 5G is yet, you’ve probably seen it mentioned in the news lately. After agreeing to delays twice, Verizon and AT&T will be rolling out the new technology for cellphone owners everywhere in the first half of 2022. However, you may be wondering what exactly 5G is and why it has everyone in the aviation industry in such an uproar.

Every time you use the internet on your cellphone without being connected to wi-fi, you are using a broadband cellular network. Although you may be used to seeing 4G or LTE pop up in the corner of your cellphone screen, soon you’ll be seeing 5G. This fifth generation of broadband cellular network began development in 2019 and will soon be sweeping the nation. After two delays already, Verizon and AT&T are expected to launch 5G in the first half of 2022. It is predicted to be 20 times faster than its predecessor 4G, with incredibly fast download speeds.

However, like its predecessor, the 5G network service area is divided into small geographical areas called cells. Each of these cells has a local antenna that connects any 5G devices in the area to the internet and telephone network. The devices are connected the antennas by radio waves.

What is the C-Band?

These radio waves used by the antennas have a frequency band between 3.7 and 4.2 GHz. This is also referred to as the C-Band. Although the only radio frequencies you think you’re familiar with are the ones in your car, if you’ve ever flown anywhere, there were different radio frequencies at work.

Much like the upcoming 5G, aircraft radio altimeters operate on the C-Band frequency. Radio altimeters measure the distance between the plane and the ground- also known as it’s altitude. The altimeter is able to do this by timing how long it takes a beam of radio waves to travel to the ground, reflect, and return to the aircraft. These radio altimeters are crucial for landing aircraft when they are experiencing low-visibility conditions. When pilots are not able to see because of heavy fog or rain, the altimeters help guide them to a safe landing.

Because both 5G and radio altimeters use the same frequencies, this where the Federal Aviation Administration (FAA) comes in. Because of the predicted complications, Verizon and AT&T have already delayed the launch of 5G twice. The launch was first supposed to be in December 2021, but was pushed back due to air safety concerns. Then, the new launch date was scheduled for January 5, 2022. Days before this new date, the launch was pushed back once more to January 19th.

The FAA has good reason for being wary of anything that will be using the same frequency as radio altimeters. Because the altitude readings produced by radio altimeters are extremely precise, they’re used to land aircraft in low-visibility conditions. However, faulty altimeter readings can trigger an automated response from autopilot systems.

In 2009, Turkish Airlines Flight 1951 crashed during landing in Amsterdam. This crash was primarily caused by the aircraft’s automated reaction- triggered by a faulty radio altimeter. The aircraft broke into three pieces on impact and resulted in the deaths of nine passengers and crew, including all three of its pilots.

What the FAA is Doing About It

Ever since the Turkish Airlines Flight 1951 incident, the FAA has been extremely wary of anything that might interrupt the C-Band frequencies. However, not all radio altimeters have been affected by the new 5G. The FAA has been testing the affects and has approved two radio altimeters used in many Boeing and Airbus planes. It is also expected that more approvals will be coming.

Currently, the approvals that have been made lift the restrictions on about 45% of the US commercial aircraft fleet. It also means that about 48 of the 88 runways most directly affected by 5G C-Band interference will be eligible for low-visibility landings. However, the FAA still warns that there will still be some flights at these airports that will be affected. In their statement, the FAA said they would be continuing to work with manufacturers to understand how radio altimeter data is used in other flight control systems.

Even though the FAA has approved the use of two radio altimeters, there are 50 airports that will be getting temporary 5G buffers installed. These 50 airports will have the buffers for six months. During this time, the FAA will continue work to ensure current aircraft equipment will not be disrupted by the new frequencies being used by 5G networks.

The Future of the FAA and 5G

As radio altimeters and other aircraft controls continue to be tested and approved, the prevalence of 5G will continue to grow. However, we will not know the true affects that these systems will have on each other until 5G is officially launched and real-world data is able to be collected.

If you are interested in a career in aviation in which you get to learn about the different systems used in aircraft, you might make a good aviation maintenance technician (AMT). To learn more about becoming an AMT and contact NCI today!