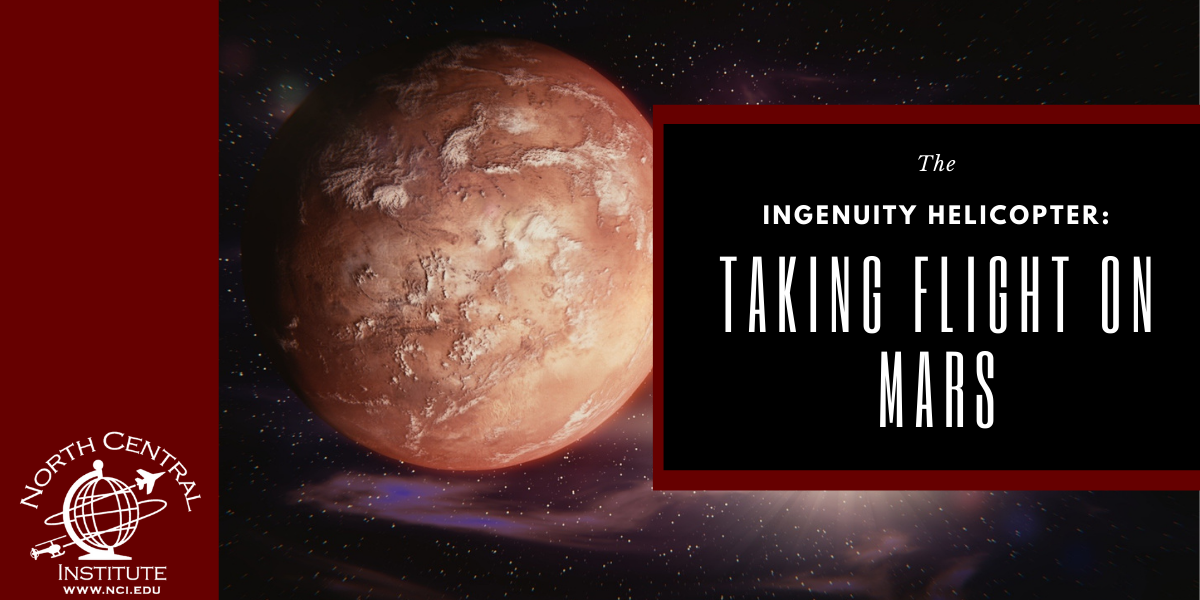 If you’ve been paying attention to the news lately, you’ve probably seen a lot of updates from NASA. Not only did their newest rover, Perseverance, land on Mars in February, it was carrying some precious cargo: a helicopter. With this helicopter, NASA will attempt the first powered flight not on Earth. Although its first flight was supposed to be on April 11th, it was postponed. A few days before its scheduled flight, the helicopter’s high-speed roto-spinning test did not go as planned. Officials at NASA’s Jet Propulsion Lab announced that Ingenuity would need some minor modifications before it could take flight.

Early on the morning of April 19th, the Ingenuity helicopter took flight for the first time. The 19.3-inch-tall helicopter took flight, hovered approximately 10 feet above the surface of Mars, and then touched down again. Although this first flight only lasted about 39 seconds, it is a huge milestone and is being described as a “Wright Brother moment” by scientists who worked on the project. Just like the Wright Brothers, this is not the only test Ingenuity will go through. There are a series of other flights the little helicopter will take. This momentous occasion was documented not only by pictures taken by the helicopter itself, but by the Perseverance rover which was parked nearby.

Although scientists have been sending spacecraft to Mars since the 1970s, the first rover didn’t touch down on the Red Planet until 1997. Besides rovers, the other space craft sent to Mars have been orbiters and landers. Orbiters, as their name suggests, orbit Mars, taking pictures as they go. Landers, actually go down to the surface, however they are not able to move from where they touch down. They are able to take pictures and gather information from their landing spot.

Rovers, like landers, go down to the surface. Unlike landers though, they have wheels and have the ability to travel around Mars’s terrain. With the help of rovers, scientists can learn more about Mar’s environment.

Sojourner was the first rover in 1997. In 2004 Spirit and Opportunity landed on the Red Planet. Curiosity, which landed in 2012, is still exploring. Information collected by Sojourner told scientists that there might have been water in Mars’s history. However, the rocks Spirit and Opportunity collected told scientists that there was once water on the now baren planet. They also brought us the first color photos of Mars. Curiosity helped to bring scientists beyond just water. Now they are thinking that there may have been life there as well. Perseverance’s mission is also centered on life.

Unlike the rovers that came before it, Perseverance is looking for more than just water on Mars. It has new scientific instruments that will help scientists puzzle out what type of lifeforms once lived on the planet. They are also looking for evidence that Mars could support life again- this time human life.

Perseverance, like the rovers before it, was named by the school-age winner of a nationwide contest. In March 202o, a seventh grader named Alexander Mather was announced as the winner of NASA’s “Name the Rover” essay contest. However, the rover wasn’t the only thing getting named. Just like the rovers, this helicopter has a name. It is Ingenuity. There were so many excellent essays submitted for the naming of the rover that NASA officials decided they would also choose the name of the helicopter from the submissions. About a month after the name of the rover was announced, Vaneeza Rupani, a junior in high school, was awarded with naming the helicopter.

Ingenuity is a 19.3 inch tall, 4 pound helicopter and has two 4-foot-wide propellers. Because Mars is almost 180 million miles from Earth, it is not possible to communicate with Ingenuity in real time. Instead, whatever flights it takes on Mars’s surface are piloted by onboard guidance, navigation, and control systems created by the team at the Jet Propulsion Lab. Between flights, the helicopter will recharge its batteries using its attached solar panels.

Although the helicopter traveled to Mars on the belly of the Perseverance rover, it is not there for the same reason. At the moment, Ingenuity is there simply to see if controlled flight is possible in Mars’s thin atmosphere.  Because the atmosphere is so much thinner than our own and lacks air molecules for the propellers to interact with, it will be hard for them to generate lift. It was essential that scientists make the helicopter as light as possible so it can take off. Not only is the atmosphere of Mars a lot different than ours here on Earth, there is also lower gravity.

If the test flights are a success, then there is the possibility of helicopters being sent with future rovers to act as a team. With the help of a helicopter, scientists will be able to explore parts of Mars that are too steep or slippery for the rovers to access. They would also give scientists a different perspective of the planet, allowing them to see it from above, not just at ground level. With the help of a helicopter, they could even gain a new insight into the geology of Mars. Someday, if human ever make it to Mars, helicopters like Ingenuity could help astronauts explore Mars further.

The Future of Aircraft

New aircraft are being thought up and created every single day. No matter where they are being used, whether on Earth or our neighboring planet, there will have to be people to build and maintain them. At NCI you can learn what you need to be apart of the future of aircraft.

Want to get your career off the ground (or even to shoot for the stars)? Contact NCI today!