Four of the Most Influential Women in Aviation History 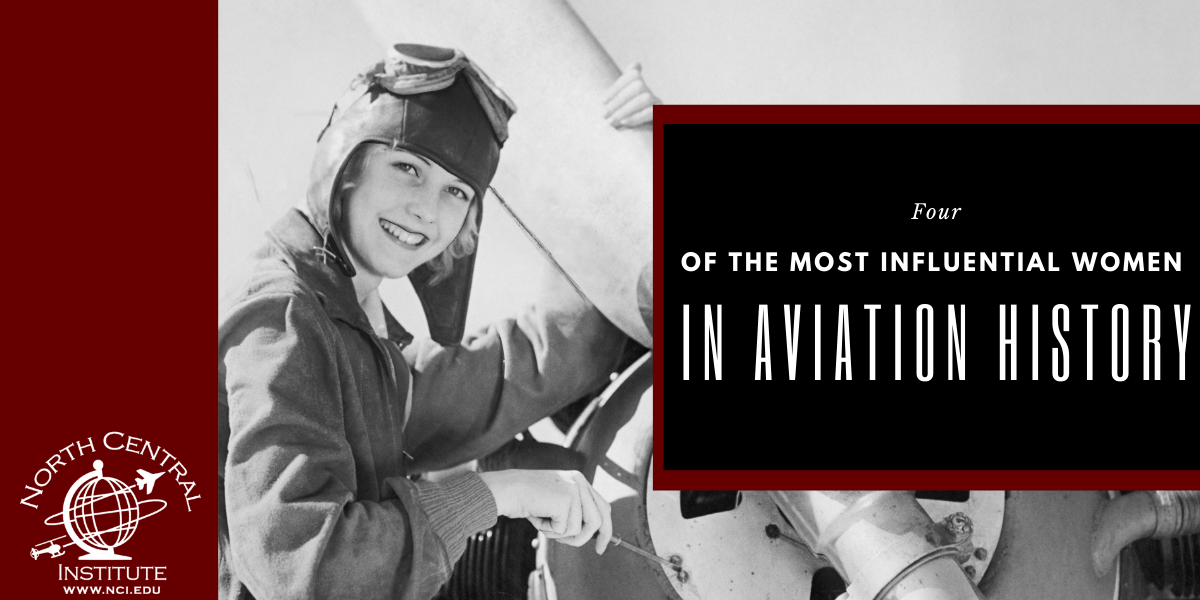 Long thought to be a male dominated field, there are also hundreds of women who have had ground-breaking firsts in the field of aviation. From pilots to engineers, women have been an integral part of getting planes off the ground from the very beginning. Since the Wright Brothers first took flight in 1903, both men and women have been making strides in the industry to make it what it is today. But remember, the Wright Brothers never would have been the success they were without their sister, Katharine, or their business manager, Edith Berg.

March is Women’s History Month, and we’ve decided we want to celebrate four of the most influential women in aviation history. These women have paved the way for thousands just like them.

If asked to name a woman in aviation, most people’s first answer would be Amelia Earhart. Not only was she the first woman to fly solo across the Atlantic Ocean in 1932, three years later she was the first person to fly solo across the Pacific Ocean from Hawaii to the continental US. Her historic journey across the Atlantic is what caused her aviation career to take off. Before that she had been working as a social worker in Boston, only flying on her days off. She first caught the public eye doing stunt flights to raise money for the settlement house where she worked.

However, Amelia Earhart might be most well known for her mysterious disappearance in 1937. She was attempting to circumnavigate the globe when she and her navigator, Fred Noonan, disappeared somewhere over the Pacific Ocean between Papua New Guinea and Howland Island. Speculations surrounding her disappearance still abound today. In 1964, Geraldine “Jerrie” Mock successfully completed Earhart’s goal of becoming the first woman to fly around the world.

Although not as well known as Amelia Earhart, Harriet Quimby was actually the first American woman to get her pilot’s license. She got her license in 1911, ten years before Amelia Earhart. Just one year after receiving her license, she became the first woman to fly across the English Channel. However, because the Titanic sank two days earlier, her accomplishment was overshadowed in the news. Quimby earned money by performing and competing in races. She even joined an exhibition team and made her debut in a night flight over Staten Island in front of nearly 20,000 spectators.

Like many early aviators, Harriet Quimby met a gruesome end. In 1912, she attended the Third Annual Boston Aviation Meet. With the organizer of the event in the passenger seat of her brand new plane, she took off from Boston Harbor. At approximately 1,000 feet, the aircraft pitched forward unexpectedly, throwing both Harriet Quimby and her passenger from the plane. Even now, it is not known what happened to the plane for it to behave in this way.

Before Quimby was a pilot, she was known as an accomplished writer and even wrote seven screenplays that were made into silent movies. At that point in time, women in aviation were very rare, but Quimby was the only woman that wrote about and encouraged other women to enter the field of aviation.

Mere days before she graduated high school, Phoebe Fairgrave’s interest in aviation was first sparked when President Woodrow Wilson’s visit to Minneapolis was commemorated by an airshow. Although after her graduation she attended drama school and worked briefly as a secretary, Phoebe quickly grew bored with these prospects. After hanging around airfields and finally convincing the airport manager to take her up, she began her career in aviation. Although the airport manager had performed stunts to make her sick during her first flight, this had only fueled Phoebe Fairgrave’s love of flying.

Even after buying her own plane, she loved to perform stunts on the wings while another pilot flew. She began wing walking, learned how to hang by her teeth, performed parachute jumps, and would even dance the Charleston on the top wing. She was even asked to perform a series of stunts in the movie The Perils of Pauline. This was the first time she flew with Vernon Omlie, the man that would become her husband in 1922. A few years later, the pair moved to Memphis, Tennessee and began offering flying lessons and mechanical services to the locals.

Elsie MacGill was the first woman in the world to earn a degree in aeronautical engineering in 1929 . She was also the first woman in Canada to have a degree in electrical engineering. From a very early age, Elsie enjoyed fixing things and was influenced by her mother to study engineering. During her summers she would work in machine shops, repairing electrical motors, applying what she had learned during the school year.

Although she never learned how to fly herself, she accompanied the pilots on all the test flights of the aircraft she worked on. She even went on to design training aircraft and was published in The Engineering Journal. For much of World War II, MacGill worked at Canadian Car and Foundry (CanCar) streamlining their operations as factories expanded. While working at CanCar she also designed de-icing controls, allowing aircraft to operate during winter. These are just a few of the hundreds of women with ground-breaking firsts in aviation. Unfortunately, there is still a distinct lack of women in the field today. Although 79% of flight attendants are women, less than 3% of aviation maintenance technicians and 7% of pilots are women. As women and young girls are encouraged to enter STEM fields, these numbers will hopefully increase. If you’ve been inspired by any of these aviators and want to be one of the countless women entering the STEM field, contact NCI today!