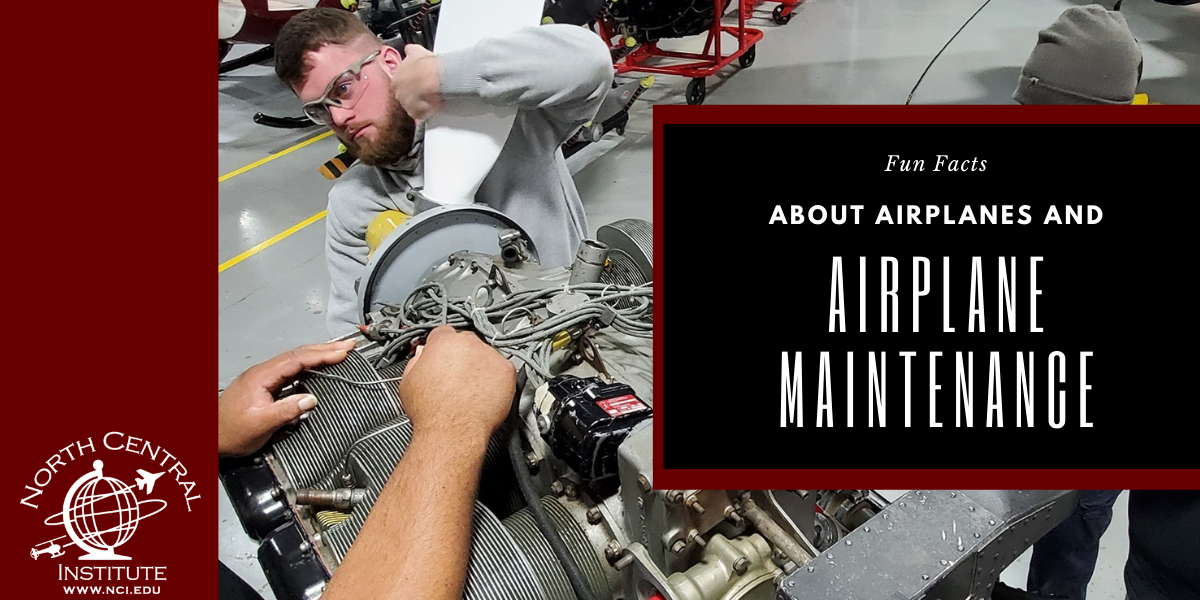 No matter how long you’ve loved aviation, there’s always something new to discover. If you want to learn some fun facts about airplanes and airplane maintenance to impress your friends and family, keep reading!

You read that right. The giant metal contraption in the sky is actually lightning proof! If you weren’t afraid of flying before, looking out your airplane window during a thunderstorm and seeing bolts of lightning might do it. However, when it comes to airplanes vs lightning, airplanes always win. It is estimated that every aircraft is struck by lightning once a year- or once per every 1,000 flight hours.

Older airplanes are made out of aluminum while more modern ones are made of composite. Both of these materials are designed to conduct electricity off of the plane. When lightning strikes a plane, the electricity follows the outer surface of the plane’s frame and then jumps back into the air via static wicks (little antenna-like devices). If a plane is struck by lightning during flight, it will be inspected and cleared by ground crews before its next flight.

It is estimated that at any moment day or night, there are around 61,000 people in flight above the United States. That’s roughly the entire population of the capital of Wyoming being in the air above us! Most people are going through Atlanta’s Hartsfield-Jackson airport, the busiest airport by passenger traffic in the US. In 2019, approximately 104 million people traveled through the Atlanta airport. In 2020, there were 548,000 takeoffs and landings in Atlanta, which makes it the world’s busiest airport by aircraft movements.

With all these people flying in United States, you may be surprised how many say they actually have a fear of flying- or aviophobia. About 40% of the general population reports some fear of flying. Only about 2.5% have what is classified as a clinical phobia however.

Did you know flying can actually dehydrate you? You may be wondering how since you’re just sitting in a chair the whole time! Airplane cabins have very low humidity levels. This is because about 50% of the air circulating around the cabin is drawn from the outside. At higher altitudes, there is less water vapor in the air. Make sure you stay hydrated by drinking plenty of water before, during, and after your flight. If you are on a longer flight, you may want to wear glasses instead of contacts and bring small bottles of lotion, eye drops, or nasal spray with you if you are worried about drying out.

Have you ever noticed food tastes different on airplanes? This isn’t just because you’re not a fan of airline food! Because of the pressurized cabin, dry air, and even the background noise, your ability to taste sweet and salty food can be suppressed by at least 30%! So the next time your in-flight snack doesn’t live up to your expectations, you know what to blame.

An Increase in Turbulence

If you’ve flown recently, you may have experienced more turbulence than you have in the past. This isn’t just bad luck, it’s science! Because of climate change, experts predict that turbulence could increase by several hundred percent in the crowded airspace above North America, Europe, and the North Pacific. An increase of carbon dioxide in the atmosphere can cause a more tumultuous flight.

Although most passengers associate turbulence with inclement weather such as thunderstorms, there are actually many causes. However, they all deal with the movement of air currents- whether because of changes in temperature or because of obstacles. Because this impending increase in turbulence is caused by a rise in carbon dioxide and not because of something like weather conditions, the prevalence of transatlantic wintertime clear-air turbulence will continue to increase as the climate changes, according to a 2017 study.

Contrails Can Predict the Weather

Contrails are the white lines you see left in the sky from airplanes. They are made up of crystallized water vapor, carbon dioxide, nitrogen oxide, sulfate particles, and soot. Contrails are caused by the exhaust from airplanes and are mostly made up of water vapor from the atmosphere. They are actually considered a type of cirrus cloud. Cirrus clouds are the long wispy clouds seen high in the sky that are made of ice crystals.

The Lifespan of Aircraft and Engines

The lifespan of both engines and aircraft aren’t measured in years! Instead, lifespan of an aircraft is measured in how many times it has undergone pressurization. Every time a plane is pressurized during flight, it causes stress on the plane’s fuselage. Over time, this constant stress from pressurization and depressurization can cause metal fatigue and cracks.  A Boeing 747 can endure about 35,000 pressurization cycles. This is about 135,000 to 165,000 flight hours over the course of 25-30 years of service.

The lifespan of an engine is measured in the number of flight hours and flight cycles. A flight cycle consists of one takeoff and one landing. Because the engine is put under the most amount of stress during these operations, airplanes are thoroughly inspected after each flight by aviation maintenance technicians.

If you’re interested in learning more about the life of an aviation maintenance technician, contact NCI today!